The Beaver County Board of Commissioners incorporated the Beaver County Transit Authority (BCTA) on May 7, 1980.  Articles of incorporation were drafted following the acceptance by the Board of Commissioners of the County’s first transit development plan, completed by the Michael Baker Corporation of Brighton Township.  Nine charter members became Directors of BCTA for a term ranging from one to five years and the Authority’s first staff member, the Executive Director, was hired in November of 1980.

In February 1983, BCTA established an on-demand shared-ride service called Demand and Response Transit (DART).  Lutheran Service Society (LSS) of Western Pennsylvania was selected to operate DART services and maintain its vehicles.  At the outset, DART was a very small program, utilizing just three vehicles purchased under the auspices of the Pennsylvania Lottery.  By 1984, however, the DART fleet had grown to 10 vehicles.

Also in 1984, BCTA assumed responsibility for the Medical Assistance Transportation Program (MATP).  This program was intended to connect Beaver County residents receiving public assistance with all manner of routine and critical medical care through the use of a wide range of transportation modes, and continues to be a vital part of BCTA’s service offering to this day.

During the early years, in an attempt to create a comprehensive and seamless array of transportation services for Beaver County residents, BCTA coordinated operations with the Greater Aliquippa Transit Authority (GATA) and provided grant services to the Pittsburgh and Lake Erie (P&LE) commuter rail line.  Due to inadequate funding and declining ridership, however, both of these services ceased operations in July 1985 – circumstances that dealt a huge blow to public transportation in Beaver County.

Quick to recognize this void, BCTA entered into a landmark period of service consolidation and restructuring, including the implementation of express bus service to meet the needs of former P&LE commuter rail patrons.  Beaver County residents demonstrated the overwhelming need for these new and improved services.  During FY 1984, BCTA ridership was 350,000, but grew to exceed 480,000 within the next two years.

As early as 1983, BCTA began planning for its own fleet acquisition program, but beginning in 1985, this capital improvement program took a giant leap forward with the purchase of eight Eagle over-the-road coaches.  Expansion of the fleet continued in earnest over the next five years and, by 1990, the Authority had acquired 36 vehicles of various size and utility.

Also during this period, the DART program was expanded to cover virtually all of Beaver County, and automated client intake and scheduling was implemented to improve customer service and streamline operations.  To offer these improved services to a wider customer base, BCTA worked closely with a variety of human service and governmental organizations to develop effective service and fare support programs for special client groups under third-party contracts.

During the late 1980s, BCTA became more involved in a variety of state and national industry organizations as well as several local and regional transportation initiatives including the Airport Area Development Advisory Commission and the formation of the Airport Corridor Transportation Association (ACTA).  In 1988, BCTA’s efforts to grow and mature culminated when the agency received the Outstanding Achievement Award from the American Public Transportation Association (APTA) as the best small transit system in the United States.

In October 1989, BCTA broke ground for its state-of-the art Rochester Transportation Center.  As work progressed on this facility, BCTA moved ahead to develop a new commuter service system and to acquire and retain modern fleet communications equipment and personnel to staff its communications center.  These actions ensured that the Rochester Transportation Center would serve as both a prudent investment in the County and a true hub of transit operations and administrative activity.

During mid-June of 1991, BCTA’s $2.4 million Rochester Transportation Center project was completed.  At the dedication of this facility, new computer and communications technology was unveiled, and the recruitment of nine new staff members to operate and manage the DART communications center was realized.

With solid operations and capital programs in place, BCTA turned its focus to improving customer satisfaction to the greatest possible extent through the implementation of management practices known as Total Quality Management (TQM) and Continuous Quality Improvement (CQI).  These initiatives included mechanisms to track and analyze a wide range of operating and performance data.  In this manner, BCTA is able to know the exact quality level of the services it provides, and make very precise changes to these services in order to improve quality.  In 1997, BCTA was rewarded for its efforts when it was named the recipient of the Greater Pittsburgh Quality Award.

At the same time, and with a similar eye toward improving service quality, BCTA initiated a complete overhaul of its DART services. Logical changes were made to routing and scheduling procedures, and performance measures and goals were adopted.  This re-engineering – completed in 1998 – resulted in an almost immediate boost in ridership, customer satisfaction, and system performance.

BCTA, however, was not content to rest with these improvements.  In October 1999, ground was broken for the Expressway Travel Center in Center Township.  For the first time in its history, BCTA was looking toward a consolidated facility that would house all operations and maintenance activities, as well as provide indoor storage for the expanding vehicle fleet – all under one roof.  This capital project, dedicated in late 2001, carries on BCTA’s long-standing tradition of improving technology deployment to better provide customer and management decision information.  Its spacious park-and-ride lot also offers expanded opportunities for travel between Beaver County, downtown Pittsburgh, and the Airport Corridor.

While the Expressway Travel Center project was ongoing, BCTA completed the most comprehensive transit development planning process since the plan that resulted in the Authority’s incorporation.  Deployed in May 2000, the plan included expanded flexible service along the Rochester-Midland corridor, new express service along the Route 60-West Busway corridor, the consolidation of 15 fare zones into five, and the introduction of new forms of discounted fare media – including the Day Pass, the10+1 Trip Ticket, and the 31-Day Pass.  Also in 2000, BCTA adopted the “Fast. Forward.” brand identity – one that underscores BCTA’s commitment to convenient services and progressive thinking.

As travel times between Beaver County and downtown Pittsburgh continue to increase, and as fuel prices rise accordingly, BCTA has experienced increased demand for commuter services.  During early 2002, BCTA deployed a 100% increase in express service along the Route 60-West Busway corridor – at the time a temporary measure to improve traffic flow during the rehabilitation of the Fort Pitt Bridge and Tunnel.  Once this important arterial route re-opened, however, our new customers stayed, and therefore this service expansion has remained in place.

In November 2002, BCTA completed yet another far-reaching improvement of its fixed route system.  All seven fixed and flexible routes were re-scheduled to “pulse” at major transfer points – particularly the Rochester Transportation Center and the Ambridge Park and Ride lot.  At these locations, all routes arrive and depart at roughly the same time, virtually eliminating transfer wait times and ensuring that a rider can effortlessly connect between routes for travel throughout Beaver County and the region.  At the same time, schedules were standardized to meet a system of consistent 30- and 60-minute headways.  Our schedules are now so simple to understand that a regular rider hardly needs to use a paper schedule – even if their travel times change!

During May of 2003, and for the first time in its history, the BCTA Board of Directors approved a self-operation plan for the agency. By eliminating the use of a contractor to provide operations and maintenance services, BCTA has improved its cost structure and retained a greater level of control over how its services are actually provided on the street.

In January 2005, fixed route fares were further consolidated into one in-county zone, two out-of-county zones, and one express zone. Though an increase in the base fare was necessary to counteract rising fuel and health-care costs, BCTA deepened the discount on its prepaid fare media to minimize the effect on regular riders.  At the same time, we introduced a new 7-Day Pass, which provides a better deal for the everyday rider than the 10+1 Trip Ticket.

If you think this sounds like a lot of work, a great deal of growth, and a high level of improvement, you’re right!  At the present time, BCTA is carrying more people, on a wider range of services, using more simplistic schedule and fare structures than at any time in its history.  But we’re not done yet.  We will continue to strive to improve all aspects of our service offering and business practices to provide the highest level of service to you – our valued customer.  If you’ve never utilized BCTA services before, we invite you to come see all that we have to offer.  We’re confident that you’ll be quite pleased! 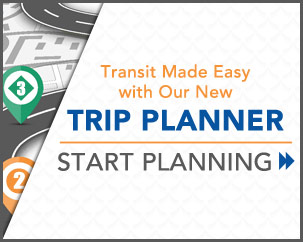